Kath was born in Cornwall, one of eight children and at a young age snuck away with a friend to Waterloo Station where she joined the Army and served with the ATS (Auxiliary Territorial Service). Kath became a Cook – First Class and served until 1942.

One abiding memory she has of her time in the Forces is of making a cup of tea for the then Princess Elizabeth who was serving as a Driver and is now Queen Elizabeth II.

Kath met her husband William (Bill) while they were both serving in the Forces, they were married in Cornwall, after which they moved to Canning Town, then to March 2006. The couple had 67 years together before Bill passed away in 2007, they had three children, Linda, Susan, and Tony. 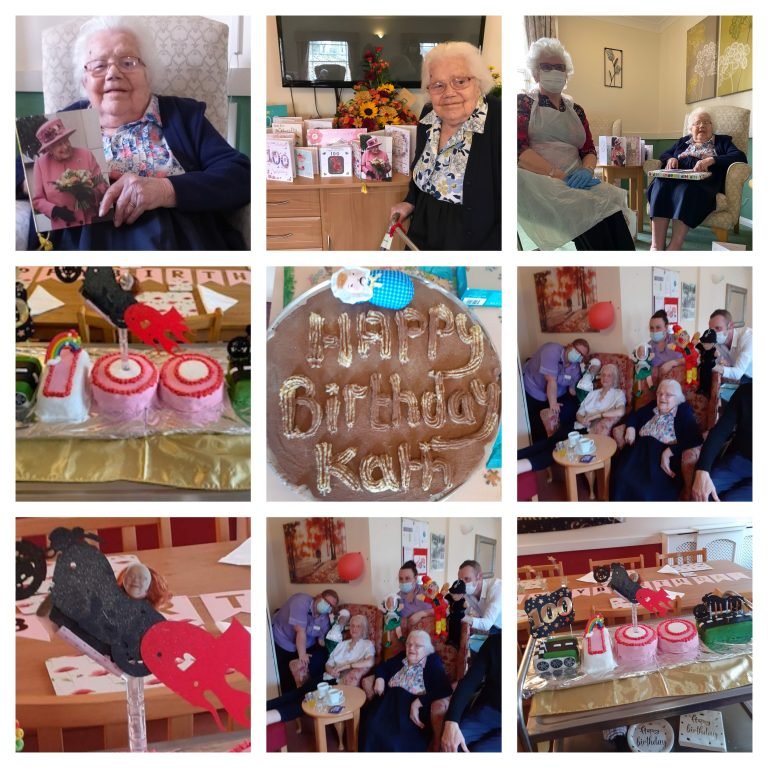 Kath, a popular and much loved resident, has been living at The Gables since February 2017 and says her recipe for living to such an age is to keep laughing. “It’s no good being miserable” says Kath.

Kath started her special day by opening lots of cards and gifts from family and friends, she was especially pleased to receive a card from Her Majesty.

Kath was then surprised with a visit from her daughter Linda made possible under current guidelines and a Skype call with son Tony.

Everyone at the Home toasted Kath with a glass of bubbly at lunchtime, and this was followed by an afternoon of entertainment by staff members performing a hilarious Punch and Judy Show.

Then of course it was time for the birthday cake, which was a joint effort by both Gable's chefs and featured a number 100 cake, a road, and a motorbike flying over it! For some time Kath has had a wish to ride in a sidecar on a motorbike. This is something the Home will arrange for her in the summer months, once we can secure the services of someone with a motorbike and sidecar.

Kath said she had ‘had a really wonderful birthday’ and thanked all the staff at The Gables for making it such a memorable day.

*Article written by Lorna Jones of The Gables Care Home*